The team Molix Bartolini-Cambi wins the first qualifying round of the T.M.T. Evolution 2018 promoted by the Italian B.A.S.S. and gains the access to the final. The competition took place in the beautiful scenery of  the Massaciuccoli Lake, in difficult conditions: with a particularly cold rainy season, the levels of the lake very high and the abrupt rise of the temperatures during the days immediately preceding the competition it was  difficult to predict the movements of the bass, in transition from the winter to pre-spawn areas.
Bartolini-Cambi were able to complete the quote of 5 bass, totalizing the considerable weight of 6.480 kg, among the highest weights recorded in the tournaments held in Massaciuccoli Lake. The winners explaining their strategy for the competition: “The tests were certainly not good, the cold season had blocked the activity of the bass throughout the trial period, however the rise of the temperatures of the last days and our experience in this place led us to think that the bass could be in shallow water areas, subject to rapid heating. The assumption turned out to be correct.
The key lure was certainly the Molix RA Shad 4.5″ green pumpkin color retrieved among the vegetation,chatterbait rigged  to stimulate the reaction of the fish in the first part of the morning but also texas rigged with 1/16 lead in the moments of minor activity. Was very helpful the reactivity and the power of the new Molix Fioretto Speciale rods casting models 6’7 ” ¾ oz and 7 ‘1-1 / 2 oz., which allowed us to hook set fish at long distances and manage them safely in the abundant vegetation. Very reliable also the Molix FC Operative Fluorocarbon of 15lb and the X-Bait Fluorocarbon 16lb. We are very satisfied of this first seasonal result, which gives us great enthusiasm for the next competitive events. ”

Good guys and good luck for the final of 13-14 October in Lago Superiore in Mantua! 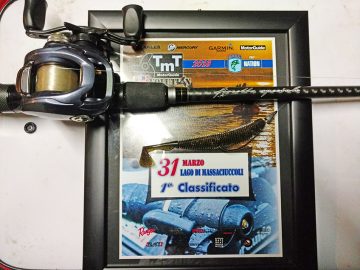 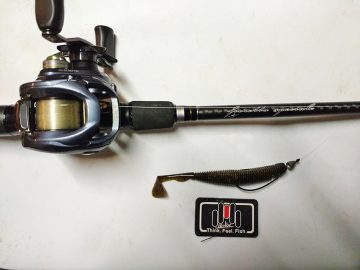 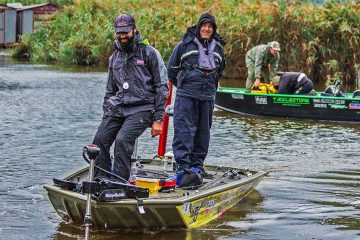 Win the Tmt evolution 2016, organized by Italybass, at Massaciuccoli Lake was very special. First of all because at Massaciuccoli lake I have been cultivating my fishing passion since I was a child and this unique and natural location still gives me carefree days. Then because I think the TMT is a prestigious competition, with many young talented anglers, prepared for our lakes and, because of limited speed of the boats, you are forced to adopt strategies and to control every move.

It was a hard-won victory and the contribution of my partner, Marco Cambi, was fundamental. We had no certainties; the tests were very poor, without significant results: some areas considered “fruitful” have been below expectations, especially for big fish. After  the prefishing of Friday even worse we discarded permanently a large part of Lake and we opted for a spot “historically” less successful, but it could give us some good catches. In these spots the water was clear (at least for Massaciuccoli), and this could be an important factor because of the rain forecasts.

On Day 1 was, indeed, characterized by incessant rain, with wind and decreased temperatures. We started from the mouth of a small channel, with classic reeds and some rigid structure,  pitching and flipping, casting sometimes some reaction baits. We used compact baits, but able to move the water as the Molix Caleo Craw and a new lure by Molix that is still a prototype, with 1/2 oz sinkers (rather heavy for Massaciuccoli, but indispensable in such weather conditions, to not lose the perception of the lure).We also used a chatterbait with the Molix RA shad 4.5 ” as trailer (bait that gave us a fish on Day 1 and on Day 2 ). The combination was right and after few hours we reached  the quote with a bass of over 1 kg and one of 0.8 kg: results above expectations. We moved to another channel and we improved our results with another bass of 1 kg. At the end of the day we reached 3.950 kg: we got the first position. 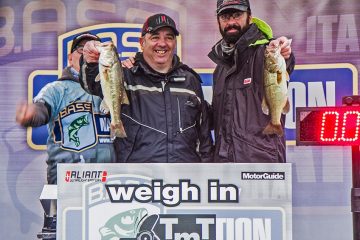 On Day 2 we replicated the strategy of the previous day, we were convinced that our area would be less affected by the heavy rain, incessant during the whole night. The day 2 started much more slowly, with fewer and more timid attacks to our lures. Our first spot gave us 3 fish and after the second spot we reached the quote shortly after the halfway point. No big bass, but once the competition ended we understood that, for the fishermen fishing in the rest of the Lake, was even worse: the murky water made many areas unusable and they caught just few fish. Our 5 bass,2.520 kg, were sufficient  to defend our leadership and ensure us the victory of the TMT 2016!

Thanks to Molix for the valuable and constant support.Thanks to Italybass for the impeccable organization, in really tough weather conditions. 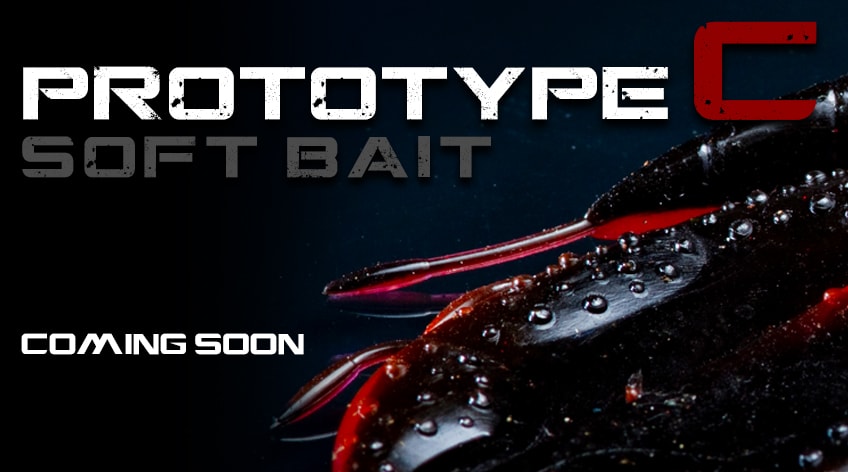 Congratulations to our boys Rudi Bartolini & Marco Cambi, winners of the “TMT Final 2016”!
And Francesco Gambazzi for catching the “Big Fish” during the Final! 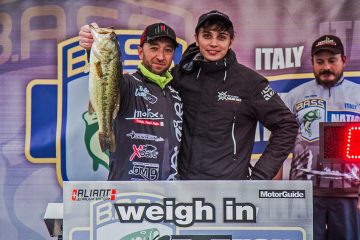 The Spanish team of Molix César Pecellín and Javier Casado, from Garcia Sola straight to the absolute Bass Championship of Spain 2016 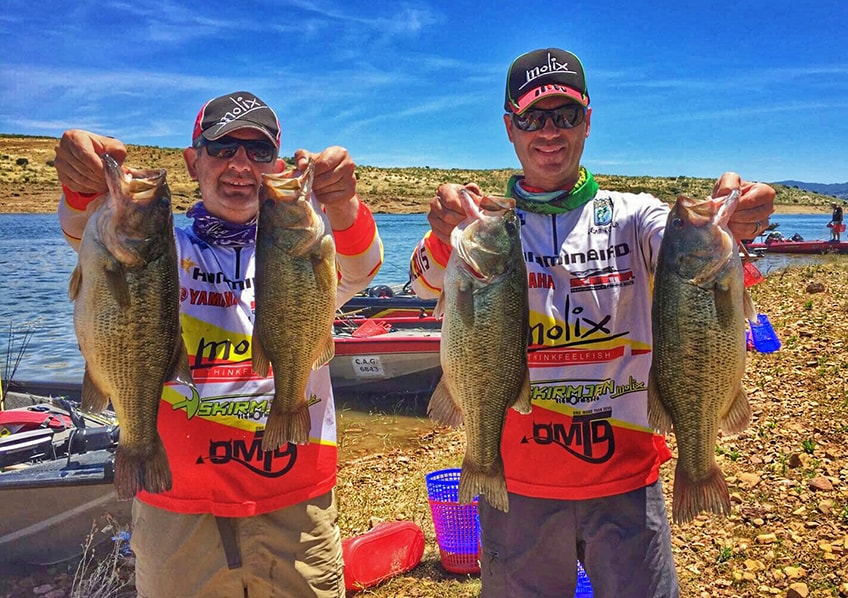 Congratulations to the spanish team of Molix César Pecellín and Javier Casado that reached the second place during the Extremadura competition last weekend. The excellent placement allows the team to compete at the Bass Championship of Spain 2016.
It is a tough competition because in June Embalse de Garcia Sola is normally very difficult for bass fishing. Despite the harsh conditions César and Javier have been the most regular team,reaching a third and second place in two sessions. They believed in the lures that they tried  during the training,adapting the use of the baits  according to the circumstances and condition of the spot, getting the maximum from each opportunity. The only regret is that they missed some topwater hits probably because of the time or because of the strong fishing pressure. Excellent share of second day- about 8 kilos-when appeared to be very complicated to catch the regulated five fishes. Winning lures: Water Slash/FS spinnerbait, Molix SB Crankbait and Molix Lover Vibrating jig. Now we look ahead with confidence.

Congratulation to our Molix Team in the U.S. Mid-West Casey Tucker and Mike Gentile for the first place at the U.S.A. Bassin Tournament Trail Div. WI-02-SW Wisconsin last Wednesday night.
http://www.usabassin.com/modules.php…
Now they stand in 3rd. place overall at just 11 points to the lead. Casey state that the key lures has been the RA Shad 3” and 4.5” also the Sligo 4” and 5”.
Great job guys and keep it up!! 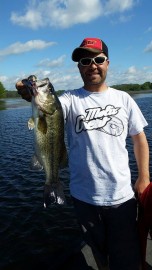 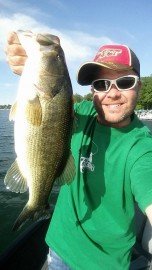